Suicide rates for White Americans have likely surpassed that of Japan in 2015.

(Consider this a follow-up on my last post, with updated data.)

What was also found was that the age-adjusted suicide rates for non-Hispanic whites were significantly higher than the national average. As they stated their source for most of the data to be the CDC WONDER database, I went to the site to collect some specific data on suicide rate trends for the non-Hispanic white population. Here is what I found:

How about Japan? In 2012, their age-adjusted suicide rate was 18.5 per 100,000 according to the World Health Organization (the actual crude rate is higher due to the relatively large share of elderly Japanese, who also happen to be a very suicide-prone age-group). The actual number of suicides appears to be 27,766 for the year, which is, as the article states, a decline from the year before when the number exceeded 30,000 (the peak was 34,427 in 2003). And it appears the decline hasn't stopped yet, as the number of suicides dropped to 23,971 in 2015, the lowest it has been since 1997.

This is an interesting development for non-Hispanic whites. After all, Japan is widely known as one of the countries with the highest suicide rates, which has become very much a national stereotype in the West, and is seen as one of the most negative aspects of Japan.

Youth suicide rates lower in Japan than in Canada, Australia 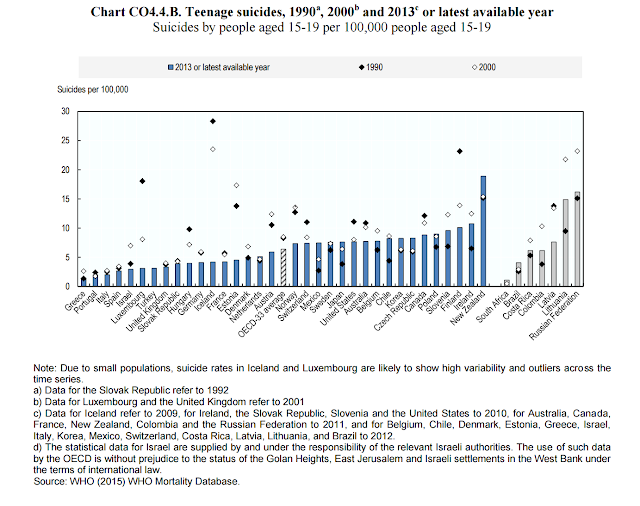 Data is from the OECD.

It should also be apparent by now that, as far as America goes, the suicide rate for non-Hispanic whites is higher than the national average. Moreover it has increased since 1999 according to CDC WONDER:


The data for this sloppily pasted table shows mortality rates for suicides only, for non-Hispanic whites aged 15-24. For all races the rate was 11.5 in 2014, with no clear trend for the 1999-2014 time period (not posting that table here). In any case, the youth suicide rate for non-Hispanic white Americans is no doubt higher than for Japanese youths, and the trend is up for both groups.

For the country as a whole, Japan does have a higher suicide rate than most other developed countries, but this is no doubt skewed higher by the age composition of the country; Japan has the largest share of elderly people as a percentage of the total population of any other country. And older people commit more suicide than the younger people.

Anyway, when the PISA 2015 results are released in December this year, expect more praise for the Finnish education system and cautioning against the education system in Japan based on its "high suicide rates". Never mind that Finland has a higher youth suicide rate than Japan, which should be a more relevant comparison than comparing suicide rates for people aged 45+ when discussing education systems.
Posted by Unknown at 17:29 No comments: